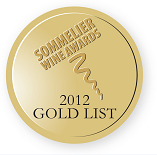 The awards, which are judged by selected sommeliers (wine waiters) saw over 1850 entries, of which only 176 were awarded a coveted Gold medal.  Biddenden’s Gribble Bridge Ortega is the first and only still English still wine to have been awarded Gold in the competition.

Biddenden Vineyard’s Marketing Manager, Vikki Wright, commented “We are very pleased to have been awarded a Gold Medal at this year’s Sommelier wine awards – something which reflects the hard work & effort which has been put into ensuring that our wines are consistently of the highest quality.  To stand out against such a wide selection of wines across an international stage is something we are very proud of”.

The award winning wine, Gribble Bridge Ortega 2010 is available direct from the vineyard shop, online at www.biddendenvineyards.com and from selected independent farm shops, pubs and restaurants across Kent, Sussex and London.