Biddenden’s Gribble Bridge White 2019 has been awarded a Gold at this year’s Sommelier Wine Awards 2019, as well as being chosen for a ‘By the glass’ award.

The awards, which are the only wine competition aimed solely at the on-trade, are judged by over 150 sommeliers and on-trade buyers who assess each wine’s food-friendliness, versatility, typicity, personality as well as value for money.  In order to reach a place on the coveted Gold list, a wine must go through two rounds of tasting, as well as being approved by the head judge.

As well as a Gold, Gribble Bridge White 2017 was also awarded a ‘By the glass’ award, recognising wines which are great value, versatile wines that would be great on their own or with food.  Only 8 wines in the whole competition are given this special award.

The wine received high praise from the judges:
‘Fresh and mineral, with green notes reminiscent of olives and sea salt,’ began Bianca Potenza of Bluespoon Andaz Hotel – Amsterdam, describing this Gold Lister as a ‘savoury wine that is perfect to be enjoyed at the beach’, while Rémi Cousin of Le Gavroche detected ‘stone fruit character, like vine peach’, and thought it had ‘great structure and texture’ and a ‘long-lasting finish’. For team leader Carlos Ferreira it had a ‘nose of stone fruits, yellow apple and pear’, a palate that was ‘salted, crispy and with a touch of white spice’ and a ‘fresh and long finish’.

Biddenden Gribble Bridge White 2017 is available at Biddenden’s vineyard shop as well as selected outlets throughout the South East.  For trade enquires please contact us on 01580 291726 or info@biddendenvineyards.co.uk 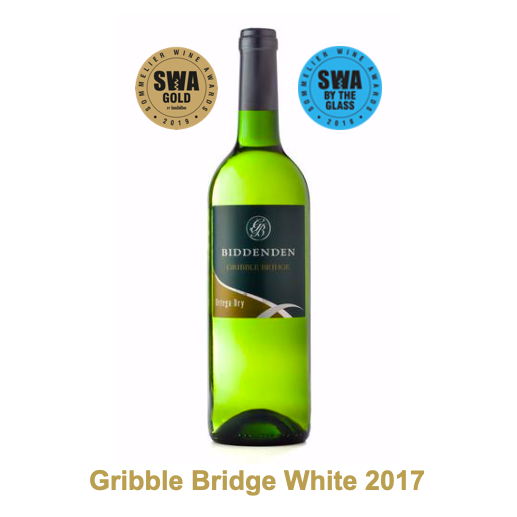